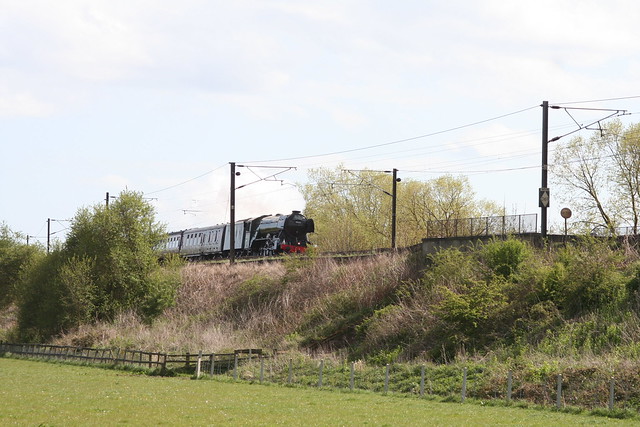 In May 2016 the Flying Scotsman once again graced the rails of the North East. These photos were caught on the East Coast Mainline just shy of Brafferton near Darlington.

The Forum in Darlington is a venue I’ve often heard good things about, but have never been to. I remember when the Music Service used to be based there, in fact I am not one hundred percent sure if it still isn’t used for people taking their practical music exams. Anyway when the opportunity rose to catch Mishkin live in concert at the venue, then it seemed a perfect opportunity to merge both experiences together.

Having been somewhat distracted by a rather noisy owl outside the house and having to wait to be relieved from being the only responsible adult at home, I jumped in the car and headed off into Darlington. Small pangs of ‘I’m not 100% sure I know where the venue is’ entered my head, but feeling pretty confident I decided to park close to Darlington Civic Theatre. Of course, there was some major event on at the Civic meaning having to park about ½ mile further away than I wanted before legging it over the gig (legging it back afterwards caused a pulled hamstring; obviously too old not to warm up these days!!) – a tweet from the band confirmed a stage time of 10pm, but an email suggesting 9:30pm. I had originally wanted to be there around 8pm, but 9pm was looking at lot more likely by this stage and I didn’t want to miss seeing any part of the Mishkin live experience.

The Forum itself from the outside is a typical red brick built Victorian style school, that has obviously undergone some extensive internal renovation. After being charged a reasonable £4; this is a venue run by a CIC so they are more deserving than many other music venues to charge punters for the privilege. Inside there were a number of practice rooms and a large ‘hall’ area that had a bar at one side and some poor soul cracking out tunes on a couple of decks – sadly his efforts were being somewhat smothered by sounds at the other end of the ‘hall’! Although to be fair there was a big wall and a couple of double doors that dulled some of the sounds from the live part of the venue.

The bar itself offered a reasonable pint of bitter for £2, although whether it was the mint chewing gum I had just discarded, Bugger Off Bitter will not be going down as one to look out for again. Having arrive later than originally planned, I only caught the tail end of the second support act, which finished on a rather shouty number called Fuck Off which rather strangely involved the front man handing the mic to a member of the crowd who knew every word – I say ‘word’ in the loosest sense as I’m not a true fan of guttural growling, although I appreciate that many people do enjoy that music, it just isn’t per se my raison d’être. Maybe it’s the height of audience participation or as I’d missed the start maybe it was another member of the band, possibly like Chickenhawk (now called Hawk Eyes) who play many gigs down on the floor amongst their adoring fans.

After the support act had finished the floor emptied, so I returned to the bar, only to find very few people in there which was rather odd. Having decided to sample the Kronenberg and finding out that £3.15 isn’t reassuringly expensive (although I think that is Stella Artois’ slogan). I pottered back in to the stage area only to find Ben and Bradie going through a short soundcheck. I guess the bigger you get, the earlier the soundcheck, but what was interesting was that for all you might describe Mishkin as being heavy metal (or not if you’ve read Harry’s guide to his idea of heavy metal), Ben actually has a decent voice and there was plenty of ‘singing’ going on to get the levels just right; although my paranoia that I might look like an aging groupie got the better of me and I eventually left them to it.

It wasn’t much later that the drawl of feedback and the pouring of grey smoke drew me back to the stage, for Mishkin’s opening A Good Day to Die. Live it sounds tight and familiar, which might be helped by the fantastic video (see the end of this article) and airplay on the likes of Scuzz TV. If I wasn’t a dodgy knee, twisty vertebrae and many additional years A Good Day To Die is the sort of music that would have had me moshing back in the day. It is infectiously catchy with a wonderful build up to the rabble rousing anthemic moment of “this night is over for you, this night ain’t over for me” which releases something primal in Ben, before Jimmy demonstrates that he is fairly handy with a guitar with some quality fretwork.

Waiting for the World to Change follows soon after, with the tight Forum venue feeling generously spacious as the sound seems to soar in, out and above the crowd, it feels incredibly uplifting and perfectly showcases those softer elements that Mishkin have in their repertoire. Although live the drums are pretty intensively heavy and could possibly just be tweaked back a little, but that’s a minor grumble.

Wisest When You Wake Up is a new one to me, but rather than being new was actually written before the Row Away from the Rocks EP, it starts as quite a soft build up of music and eases you in, before there is a wonderful pause, comparable with The Hives classic Hate To Say I Told You So video, before the band decide to hammer you into submission, brutal and epically enjoyable in equal measure.

A blend of real gravely grunts and hand clap moments were a highlight for the crowd as Mishkin began to get some real interaction, although with his foot on the metal barrier Ben looked like he either wanted to crash it to the floor or leap over to get in amongst the fans, neither happened, but it reflected the intent of what was happening on stage, with both Dave and Jimmy itching to join in the fun. Despite the fact that by this point of the evening everyone in The Forum was loving each second that Mishkin were on stage, a curfew was in place and Violation was the finale. Unless my notes are mixed up, it’s all about the unfortunate moment when you run out of toilet paper, although when Ben takes a vocal sabbatical we were at least treated to some very entertaining Blues Brothers-esque dancing.

And then it was all over, the band thanked everyone for turning up and within a few minutes mingled with fans at the bar, presumably packed the van and headed back to Leeds. I’m still baffled why Mishkin are still unsigned and on this showing I guess the only answer is to keep going until someone signs them up, surely it’ll happen one day and in the meantime watch the video for A Good Day To Die below and visit their website to check when they are going to be at a venue close to you. Only two downsides (1) my iPhone takes crap pictures in the dark (2) it wasn’t clear where the merchandise stall was as I could have done with a new black t-shirt, if anyone had got close enough they’d have realised I was actually in brown!